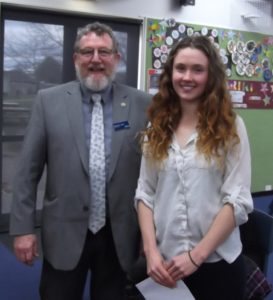 Kirsty Cochrane was presented with the 2017 West Melton Scholarship by Deputy Mayor, Malcolm Lyall at a recent event at West Melton School. Kirsty is her final year of a Degree in Spatial Design at AUT. She explained to those present that ‘spatial design’ is best defined as ‘architecture without the engineering’. Some of her course work has been used as examples for future students and has been entered into design competitions. She is specially interested in designing for disadvantaged people.

When presenting the scholarship, Malcom Lyall commented that it was very important to recognise excellence because well trained people are essential to the community. He congratulated Kirsty and wished her well. In reply, Kirsty recognised her parents, who were present, for encouraging her to follow her interests and credited her teachers at Riccarton High and West Melton for their guidance and encouragement. She advised the pupils present to follow their dreams.

The West Melton Scholarship is awarded annually to a final year student enrolled in a tertiary institution. Applications are called for later in the year and the West Melton Schoarship and Awards Committee meets in February to assess the applications.