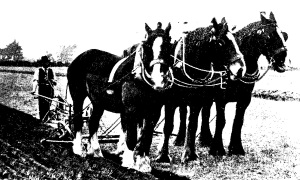 Horses played a major role for transport and agriculture. They pulled carts for transporting people and draught horses were used for pulling agricultural implements. A paddock would be ploughed and after the seed had been scattered by hand from a sack strapped to the man’s shoulders the ground would be harrowed to cover the seed. Imagine the effort involved with the weight of wheat to plant. Reaping began as soon as the grain was ready as there was a risk of it being shaken out by a nor’wester. It was cut with either a scythe or sickle and tied into a sheaf. As time went on reapers and binders that could be pulled by a horse were introduced to do this work. Traction engines were used to operate threshing mills and huge loads could also be hauled using trailers. Early mills in or close to the district were owned by J. Calder, A. Whyte, J. Watson and J. Curragh.

In 1882 Wm. Coggan bought the section where the B P Centre is now and started business as a Blacksmith. There were a number of blacksmiths living in or near West Melton: Drayton, Price, Cass, Welbourne and Bowers. Some of these men lived in the area called Yorktown (between West Melton and Aylesbury).

The West Melton Cricket Club was opened in the late 1880’s and matches were played against Weedons, Upper Riccarton, Templeton, Prebbleton and other districts. It is known that games were also played at Kirwee and Greendale. There is a photo of the 1896 team with D. Sinclair (School Principal) in the front row holding the bat. Players included: Fincham, Thomas, Gudsell, Ellis, Wilson, Walker, Prebble, Vaughn, Saunders, Sinclair, McIlraith, Trickett, Thompson, Thompson and Curragh. Some good bowling figures included: F. Trickett 7 wickets for 4 runs, R. Wilson 6/15, D. Sinclair 9/35 and T. Fincham 8/19. It is not known how long the Club lasted but the local Weedons Club which was established in 1879 is still going strong.

In 1891 a daily mail contract between the Weedons Railway Station and Halkett via West Melton was started. J. Frith carried the mail by horse for £35 a year. Ten years later the contract with horse and cart was worth £53 a year.

The West Melton Saleyards Company was formed in 1892. A five stand shearing shed and a 60 foot long dip were built. Yards were built to hold sheep and every month well attended sales were held for the next 30 years. The first Directors were G. Watson and G. Witty.

Small birds were introduced to eat the grubs and caterpillars that were eating pasture and young crops. They did a good job but a few years later they also started eating grain so they too became a nuisance. The Council paid for birds eggs and this was a good source of income for young boys.

In 1891 George Watson represented West Melton on the Courtenay Road Board, a position he was to hold for the next 20 years.

← A store, a hotel & water races
Calling for voluteers! →