At tonight’s Residents Association meeting we had an update from Murray England, the Strategic Assets Manager for Utilities at the Selwyn District Council.

In his presentation, Murray discussed the issues contributing to the recent water supply problems in West Melton township.  Beginning with a diagram showing the topology of the town water services, Murray explained how West Melton was supplied by three main bores; one near Royston Common in Halkett Grove, a second on Elizabeth Allen Drive in Preston Downs and a third on Jacqueline Drive.  He explained that the town had 210 cubic metres of storage and four pressurising pumps in the system.

At the heart of the matter was a water quality problem with the Elizabeth Allen Drive & Jacqueline Drive bores.  These wells had a track-record of providing low quality water after significant rain in the area.  When this problem was discovered some 12 months back, a UV treatment system was added near the Elizabeth Allen Drive well to ensure water would remain safe for consumption.  The Jacqueline Drive well was shut down, as the surplus provided by the well was not needed at the time, while the Royston Common well was able to continue untreated.

But since, there has been a tremendous growth in the number of connections to the system and increased demand that goes with summertime irrigation and a recent incident with the local school swimming pool.  As shown below, the number of water connections in the township has doubled since this time last year. 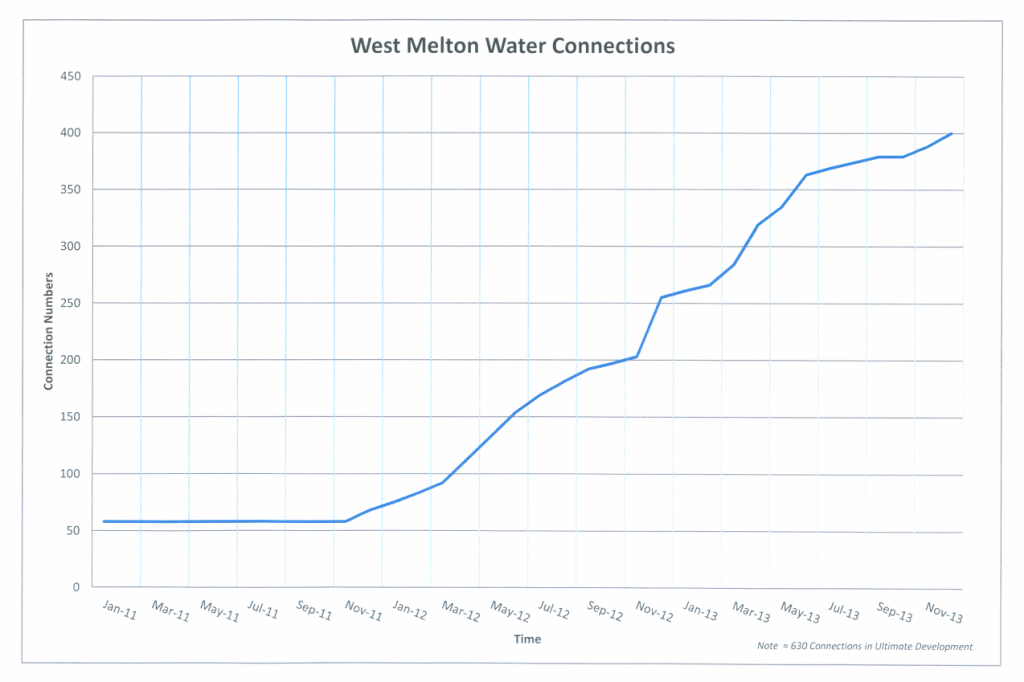 The solution is to bring the Jacqueline Drive bore back online as soon as possible by UV treating all outputs from the well.  Selwyn District Council is working hard to do this, by installing a new water supply pipe from the Jacqueline Drive across to the existing UV treatment system so both well outputs can be treated by the same unit.

Murray expects this work to be completed near the end of January 2014 and in the meantime has asked for the community to be mindful when using water.  One of the best ways to ease the demand on the system is for residents to restrict their water use during peak hours, particularly irrigation, between 4pm and 9pm.  The graph below shows the typical 24 hour water consumption and reservoir  level in the system.

Murray recommended garden & lawn irrigation be set to early morning hours if possible and for residents to use the new online water supply status (http://www.selwyn.govt.nz/wmwater) to gauge when to restrict their usage.  Another measure the council has made to curb water usage, is restricting the system’s pressurising pumps to only run two at once instead of four.  This change effectively clamps the maximum flow rate of the system to 30 litres per second, with any increased demand above this resulting in reduced system pressure.

The current base allocation system for household water usage was discussed following the presentation.  Murray indicated that it was likely that a new system would be adopted mid-2014, probably with a lower base allocation of water per household, charged out for excess usage.  Any changes to the current system will be made with consultation of the Residents Association.

Households in Selwyn tend to be heavy users of the resource, mainly offset by the larger property sizes and irrigation use.  West Melton households currently average 1400 litres per day whereas Auckland households average 500.  Murray suggested residents read their meters across a 24 hour period for an idea of their own usage.