An update on West Melton water

The report recapped the cause of the recent problems with the town supply, owing primarily to poor water quality in two of the town’s three bores. 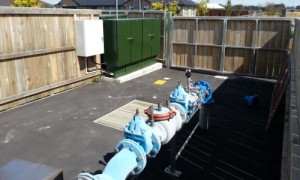 The first part of the solution was to bring the Jacqueline Drive bore back online, connecting its output to the existing UV water treatment facility at Elizabeth Allen Drive. This work was completed on January 29, and the council are now in the process of re-commissioning the Jacqueline Drive bore – monitoring performance and adjusting pressure and flow set points. This process is expected to take a number of weeks in order to optimise the system and resolve any unexpected aquifer performance issues. But residents should have noticed a more consistent pressure throughout periods of high demand already.

The report suggested that residents continue to monitor the online water supply status and take measures to curb water usage during the peak hours, 4 – 9pm.  The system which reduces water supply pressure when the reservoir capacity drops below 40% will remain in place.

The report described several more changes which are being planned to help secure the supply as the town’s population continues to grow.  Additional land at the Elizabeth Allen Drive site has been secured to allow the installation of a second bank of reservoirs or an additional bore as required.  Also, discussions with Environment Canterbury have been initiated to review daily water allowances and abstraction rates from the three bores with the aim of increasing abstraction capacity to meet the future demand.

“It should be noted that the water abstraction consent granted by Environment Canterbury for the West Melton township puts water restrictions in place when ground water levels drop below a predetermined level.  There is potential that during a period of prolonged fine weather that water restrictions will be implemented because of consent requirements.”

Another change being considered relates to the default annual 1200m3 allocation per household, being the highest allocation within the Selwyn District.  As described in Activity Management Plan (2012) this is provided at >175KPa which is one of the lowest target pressures in the district.  300KPa is a more standard pressure.  The report suggested that both the water pressure and volume allocation be reviewed in conjunction with the West Melton Residents Association.

“The District is experiencing unprecedented growth with major water and sewer upgrade projects being implemented across our growth areas.  All endeavours are being made to implement these upgrades in a timely manner while acknowledging current pressures on contractor and engineering resources.”

← Early roads and services
New 150th flags on their way →