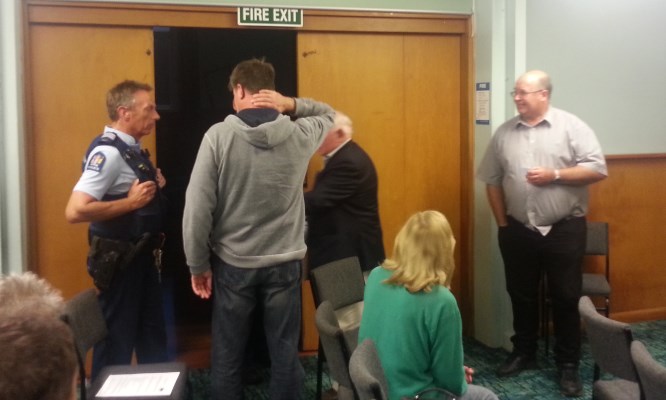 Tonight was our special public meeting to discuss the possible formation of a community patrol in West Melton.

A light turnout of committee members this evening, but with plenty on the agenda, Jeff was eager to get the meeting started. The following summarises the topics discussed during the evening.

Water Fountain
Peter Stafford has now relocated the water fountain from its former home at the intersection of West Melton and Weedons Ross Roads. Repairs to the fountain are now under-way. The WMRA agreed to extend funding of this project to $2,000 (ex GST).

Neighbours week
Bruce announced the Selwyn District Council’s Neighbours Week for 2014, being the week of October 24. He encouraged others to set up their own street parties and similar events, reiterating that the council will fund such events, usually to the tune of $100 for food and drink etc. The process this year is to run the event, then apply for remittance using receipts afterwards. It’s a good idea to seek approval for your event first – community@selwyn.govt.nz.

Defence training
Bruce wanted to remind people that the NZ Defence Force is entering a training phase. While based in Burnham, the army will be making greater use of the West Melton Army Rifle Range during this period. The NZ Army has been running regular advertisements through local sources to raise awareness of this. Bruce reiterated how large ammunitions now tested and trained in Tekapo instead of West Melton.

The West Melton Reserve Board met on September 15, 2014. The following was discussed.

WM Reserve Pop-up Irrigation Project
Drummond & Etheridge are currently undertaking an irrigation upgrade project at the reserve. The works involve the construction of a ring main and installation of pop-up sprinklers across rugby and football fields. This will significantly improve the efficiency of the irrigation system, resulting in better utilisation of water and more even grass growth. The fields are currently fenced off while the works are underway due to the use of heavy machinery. Works are expected to completed by the end of September.

WM Reserve Rugby Field 1 Development
McLenaghan Contracting are currently undertaking a project to re-grade and re-seed Rugby Field 1 at the reserve. The works have involved the stripping of topsoil, re-grading of the underlying gravels and the placement of an even thickness of topsoil over the playing area. The works are being completed in conjunction with the irrigation project and will improve the condition of the main rugby field. The fields are currently fenced off while the works are underway due to the use of heavy machinery. Works are expected to completed by the end of September.

Club Reports
Touch rugby starts again at the reserve on Tuesday 7 October and will run on Tuesday evenings over most of the reserve
Summer football starts again in mid October and will run on Wednesday evenings
Summer bowls has started again
Tennis have their opening day this Saturday 20 September
Please contact Reserve Board Chairman (David Heiler, ph 347 2363) or Caretaker (Steve Lea, ph 3479557 ) or if you have any queries over activities or works at the reserve.

It was a full house at the West Melton Community Hall, with many residents making the decision to come to the public forum to hear Hamish Wheelans speak about the proposed residential subdivision of the Wilson South Block which was submitted for consent this week.

Bruce Russell began with a warm welcome to Hamish and his staff, giving credit for his past involvement with the community and his willingness to engage West Melton Residents with this latest project.

Hamish began by outlining how the project had progressed over the past two years since the land was purchased – the zoning, the name (A mashup from the Wilson Stud Farm name) and how an initial design was “thrown out the window” before arriving at the design submitted this week.

Referencing the ideas and process behind the development of Preston Downs, Hamish outlined his desire for Wilfield to have a similar theme – blended lot sizes, open spaces, natural contours and features, integrated with community clubs, services and existing infrastructure.  Hamish described how the design fits with the natural (old) river channels of the site and how covenants would be used to maintain the site contours for drainage etc.  Hamish’s intention is to keep many of the hedges, shelter belts & large trees where possible.

Tonight’s WMRA meeting was well attended, including several welcome guests from the community.

The proposed $84k lighting upgrade to West Melton street lights was discussed tonight. The major causes of light pollution in the area were debated along with possible steps to reduce these effects. The committee resolved to invite representatives of the West Melton Observatory to the next meeting.

Tim presented the results of the online poll regarding the community patrol. The majority of the community had backed the initiative with 108 votes for, and 5 votes against. 61 people indicated they could volunteer 4 hours per month to the cause. Local Constable, Chris Caldwell gave some good background to the discussion that followed, referencing the trends and patterns that he had observed in his six years experience in the district. He suggested the WMRA consider joining with the Rolleston patrol for the mutual benefit of the area. Chris cautioned that crime had not actually ‘set-in’ in the area and offered to provide the WMRA with full statistics to support this. Watch for an article by Chris on this topic in an West Melton News soon. The Residents Association will advertise a public forum in November to discuss the Community Patrols initiative further.