The Waimakariri Mounted Rifles was a volunteer squadron set up between 1899 and 1903. It was known as E Company, 1st Battalion of the North Canterbury Mounted Rifles. Camps were held at Canterbury Show Grounds or the Recreation Reserve. Rifle practice was held at where the present Army range is or on butts near Chattertons Road on the north side of the Coal Track. About 70 men were involved. Butts were mounds of earth with a target on the sides so that any missed shots would go harmlessly into the dirt bank.
Alfred Saunders J.P. lived in West Melton in the 1890’s and was M.P. for Selwyn. He had been associated with Nelson Provincial District for 25 years – part of the time as Superintendent. He was a total abstainer all his life and was an active member of the Temperance Society from the age of 16.

John Hill retired to Christchurch after living more than 45 years in West Melton. He had increased his holding from 170 acres to over 1000 acres. He had served on many committees in the District and he and his wife were farewelled by a large gathering.
In 1903 J. H. Hutton bought the Blacksmith business and was to remain as blacksmith for the next 34 years. It was always a fascinating place for young boys to watch the metal being heated, hammered and then cooled in cold water. 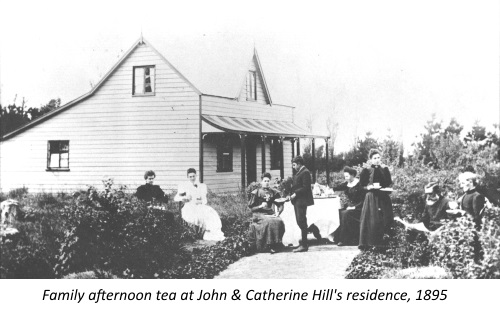 The present Domain of 10 acres was purchased in 1909 with the help of the local M.P. George Witty who lived on the corner of Newtons and Dawsons Road. Ornamental and pine trees were planted around the field and local farmers grazed sheep there until 1957 when the present Domain Board was formed with Jack Litten as Chairman and Bill Henderson as Secretary.

The first tractors owned in District were those of F. Langdale and R. Dawson and the first car was the De Dion Bouton owned by William Hill.

Electricity from Lake Coleridge to Christchurch via Islington went along power lines following what is now the Main West Road in 1915. It was a further 15 years before the first West Melton houses were supplied and for some it wasn’t until 1954. Our house on Newtons Road was connect ed in late 1954. A great relief for my mother to not have to cook on the coal range in the summer heat and to chop the wood small enough for the fire box on the coal range.

During the 1st World War 15 young men were farewelled from the District. They went to Europe to fight alongside Britain against the Germans. In 1916 a West Melton Red Cross Sub-centre was set up to send parcels and help with Patriotic fundraising. Those who made the Supreme Sacrifice were D. Fincham, D. Foley, G. Lyons and my uncle C. L. Watson.