A light turnout of committee members this evening, but with plenty on the agenda, Jeff was eager to get the meeting started.  The following summarises the topics discussed during the evening.

Millennium Fountain
Peter Stafford has now relocated the water fountain from its former home at the intersection of West Melton and Weedons Ross Roads.  Repairs to the fountain are now under-way.  The WMRA agreed to extend funding of this project to $2,000 (ex GST).

Bruce announced the Selwyn District Council’s Neighbours Week for 2014, being the week of October 24.  He encouraged others to set up their own street parties and similar events, reiterating that the council will fund such events, usually to the tune of $100 for food and drink etc.  The process this year is to run the event, then apply for remittance using receipts afterwards.  It’s a good idea to seek approval for your event first – community@selwyn.govt.nz.

Defence training
Bruce wanted to remind people that the NZ Defence Force is entering a training phase. While based in Burnham, the army will be making greater use of the West Melton Army Rifle Range during this period. The NZ Army has been running regular advertisements through local newspapers to raise awareness of this. Bruce reiterated how large ammunitions are now tested in Tekapo instead of West Melton. 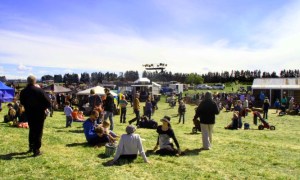 Jeff congratulated the 150th Field Days volunteers on behalf of the committee for delivering such an exceptional event two weeks back. This was answered by Nicky who was clearly also thrilled with the way the days ran and the overwhelming response from the public. An estimated 2700 people were in attendance at the peak near mid-day, making it possibly the biggest public event on record for West Melton. “This was just a teaser for Labour Weekend” said Nicky, “If you missed out this time, then come to the grand parade – we’ll be converting the street into an olden day village using the cottages and other props”. Nicky mentioned how several people had asked why there was no gold coin donation at the gate. “This event was always meant to be for the public, by the public. We didn’t want to have any excuse why people couldn’t come along” she said. The event was entirely resourced through donations, volunteer organisation and working bees, and through the sale of mechanising such as tea towels, badges, wine and the like.

There was plenty to report for the forthcoming Labour Day events; John Wright has confirmed as a speaker for the Mix & Mingle, John Key is not available for Sunday’s ceremonies so the committee is exercising some other options, a pamphlet covering the weekend’s line-up of events will be posted to households next week and the next ‘The Record’ will be a historic edition with a full page pull-out for the 150th. Nicky mentioned that they’re still looking for teams for the Sports & Recreation Fun Day – you don’t have to be super fit to enter. Nicky covered the parking plans for the weekend, saying that local residents will be best to walk to events, leaving the designated parks for folk who need to drive.

The group discussed the next steps for the Community Patrols initiative. The outcome was that a special public meeting should be held at the next meeting on November 19, to include guests from CPNZ.

Wilfield underpass & traffic
Options for pedestrian access across SH73 both to the proposed Wilfield block and West Melton were again discussed at length. There are some strong feelings about the GWL proposal as it stands. The overall standpoint was that the proposed second crossing proposed by GWL was by no means safe for regular use by children. Pedestrian lights, an underpass or overpass would be the only acceptable crossing methods.

ANZAC Day
10am was suggested as the time for the first West Melton ANZAC Day service, based at the school’s new memorial.

Sunday ceremonies
Details of Sunday’s Commemorative service were discussed well into the night!