As the District has grown so has the School. Mary Heyde has been involved with administration since 1992 and Lindsay Bromley since 1996. In 1997 Sue Jackson was appointed Principal. The School roll in 2000 was just over 260. The new administration block was opened in 2001 by Rt. Hon.Jenny Shipley MP for Rakaia. In 2004 the School House was removed to Twizel and the section converted to a much needed car park. In 2007 Isabel Moylan retired after 19 years as a Teacher Aide. An artificial cricket pitch was installed in 2009 and in that year the PTA held its first Christmas Wonderland House and Garden Tour and raised $10,000 for the School to purchase computers.

On September 4th 2010 Canterbury was hit by a large 7.1 earthquake which was centred in the Selwyn District. Although many properties in the district were damaged the School came through the earthquake relatively unscathed. School was closed for a week. Once again the PTA held another Christmas Wonderland fundraiser with great success.

The February 22nd earthquake of 2011 saw an extra 50 pupils enrolled from Christchurch Schools that had been closed. This devastating was centred in Christchurch. The new two storey building was opened by Rt. Hon. Amy Adams, MP for Selwyn. End of year School roll 276. The 2012 Christmas Wonderland fundraiser raised over $20,000 for solar heating of the School swimming pool.

The increased demand on housing on the west side of Christchurch, as families relocate from the red zoned areas, has seen a large portion of land made available for housing development, resulting in a huge increase in population. The roll at the end of 2013 was 358. The School is now in the process of redevelopment to cater for the increased roll. Some of the classrooms have been earmarked for replacement and another two storey block of classrooms and administration area is planned. Predictions are for the School to finish the 2014 year with 415 students.

There are three pre-school groups operating. The Play Centre was opened on Community Centre ground in 1976 and is still going strong. The West Melton Kindergarten, Nursery and Learning Centre was opened in 2000 and is opposite the School in Weedons-Ross Road. More recently the Cat’s Pyjamas Preschool and Nursery opened in Iris Taylor Avenue.
West Melton had two millennium projects for the year 2000. To mark the birth of Jesus Christ two thousand years ago Peter Stafford coordinated people from the three local churches to build a drinking fountain of local Greywacke stone and granite. The other project was a bas-relief sculpture of a horse and a community noticeboard that were erected at the Community Centre by the West Melton Residents Association.

The shop has been owned by Diane and Andrew Henderson for over 20 years and is now called the BP2Go.
In 2007 the Gainsborough subdivision was started on the east side of Weedons-Ross Road opposite the School. Four years later the Preston Downs subdivision on the west side of Weedons-Ross Road from Halkett Road to the Main West Road was started. Soon there will be another 62 ha subdivision in the Main West Road /Weedons-Ross area (excluding the 4 ha corner block).
A new shopping centre is planned for the Gainsborough subdivision on Weedons-Ross Road which will include a Fresh Choice Super Market, Restaurant and Bar, Café, Vet, Doctor, Pharmacy, Hairdresser, French Bakery, Indian Takeaway, Real Estate Agent, Women’s Fashion and a Beautician.

In 1881 when Alfred Saunders MP arrived in West Melton he bought a farm that he referred to as a “bleak and wild looking property”. What a vast difference there is in the West Melton landscape now where there are beautiful properties with plantings of trees, shrubs and manicured lawns.

There is a great community spirit in West Melton that was obvious during the ‘Time after Time’ weekend where everyone pitched in and brought the past back to life. 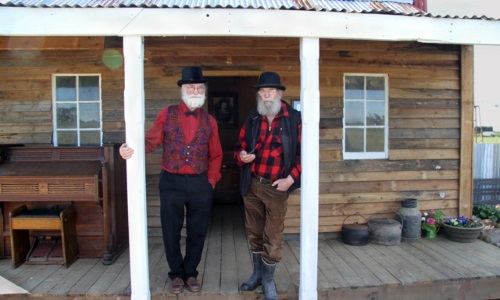