A store, a hotel & water races 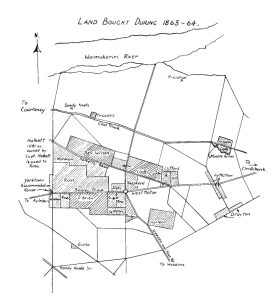 The Store was opened in 1872 on a section on the town side of the Wesleyan Chapel in Bealey Road (now Main West Road). Prior to that settlers got their supplies from Christchurch, which wouldn’t have been very convenient. The Store was a General Store and sold groceries, drapery and farming goods. When times were hard and money was scarce groceries were paid for by exchanging eggs, butter and grain etc. A Post Office was opened in the Shop also in 1872.

Medical services were non-existent and to see a Doctor in the early years required a trip to Christchurch. In 1870 Mrs. J. Jones was the local mid-wife and for the next 45 years she was affectionately known as the “mother of West Melton”. She also ministered to the sick and was a friend to all.

There were Accommodation Houses along the Coal Track (now Old West Coast Road). These were useful for gold diggers going to the West Coast. They were the Miners Arms and Watson’s Half Way House. The West Melton Hotel dates from 1881 when James Thompson built an Accommodation House on the corner of Bealey Road and Rolleston (now West Melton Road). An area for holding livestock was provided and a compulsory kerosene lamp lit for the travellers caught in the dark. At some stage separate rooms were built for shearers and on wet days the bar would have been a popular place to spend an hour or two.

A Band of Hope was formed in the late 1880’s as a reaction to the increasing amount of drunkenness in New Zealand. The aim was to restrict the sale of alcoholic liquor. There was a West Melton Branch and people signed a pledge “promising by divine assistance to abstain from all intoxicating liquors as beverages”

An early Recreation Ground was formed on 20 acres and Henry Trickett was Secretary for 29 years. There was an area for playing cricket and an athletic and cycling track. It was on the town side of Cemetery Road (now Wylies Road)

In the mid-1880’s water races were formed with water from the Coal Tramway Reserve, which was sourced from the Kowhai River. This water was very clean and ran through Sheffield to Rolleston. The water race followed along the side of Bealey Road from Aylesbury to West Melton. Another headwork was installed in the Waimakariri River near Halkett and it was from this intake that most West Melton’s stock and domestic water was obtained. The Frozen Meat trade had started and stock needed water to survive.