In 1923 the local mail contract was a motorcycle delivery by W. H. Oakley for 100 Pound a year. This service was discontinued and the Greendale Rural Mail Delivery (now RD1, Christchurch) was started in 1925 by E. J. Edwards. 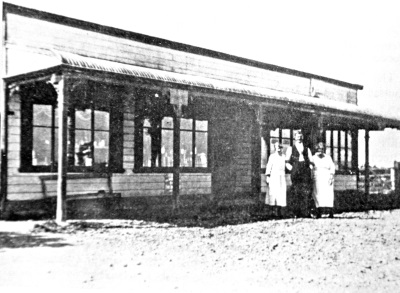 The Post Office in the Store was closed in 1924, but the Telephone Office continued. From 1919-1923 H. T. Fella increased the annual income of the Store from £3,000 to over £10,000. He sold firewood, plough shares, binder twine, stock salt, drapery as well as groceries. Petrol was sold in 4-gallon tins. Sometime around 1930 the Store was burnt and for a while a shed was used.
In 1937 Mrs Stanlake bought the Blacksmith Shop and converted it in to a Store. This was to be used for the next 20 years.

Transport was difficult as the roads were not in good condition. The Main Road from Christchurch was tar-sealed as far as the Hall in the 1930’s and it was a further 10 years before it went further west. All the other roads were shingled and graded occasionally to fill in the potholes. The railway had reached Arthur’s Pass in 1914 but the Otira Tunnel wasn’t completed until 1923.

In 1880 Lincoln College had been opened and experiments there were carried out to benefit the farming community. This has been of great assistance in helping to increase production. In 1922 Kempthorne Prosser and Co. had opened their Fertilizer Works at Hornby. Superphosphate was used with mixed success and it wasn’t until the pH of soil was raised through using lime that more fertility was achieved.

By 1925 stock sales at the West Melton Saleyards had almost ceased to exist. The Shearing Shed became the Social Hall. It burnt down in 1935 and the present concrete Hall was built. At that time A. E. Langdale-Hunt was the Chairman of Directors. This is now known as the West Melton Community Centre. A Plunket room and an enlarged supper room were added in 1961.

George Watson bought his first land in West Melton in 1870 and by 1900 was farming 1,000 acres in the Weedons-Ross, Halkett and Old West Coast Roads area. He had married Charlotte Hill (daughter of John) in 1882 and they had 6 children. He was a Lay Reader and Warden of St Paul’s Anglican Church for 35 years, on the School Committee for 20 years (6 as Chairman) and a member of Local Government for 27 years. He retired to Christchurch but soon returned and helped his youngest son George Melton Watson with farming at Sandy Knolls.

The prices for farm produce in the 1860’s during the Gold Rush period were extremely high. Land speculation and extravagant borrowing and spending were followed by a severe social and economic crisis that was to last for the next 20 years. The worst years were between 1888-1895. From the time of the Boer War until the 1920’s prices gradually improved. Once again this encouraged a demand for land with inflated values. Between 1931-1935 there was another depression (the slump, it was called). Finance was hard to obtain. Some farmers went bankrupt; some were forced to sell while others just walked off their farms. Those who had small mortgages or no mortgage were able to survive but it was not easy and times were extremely hard.