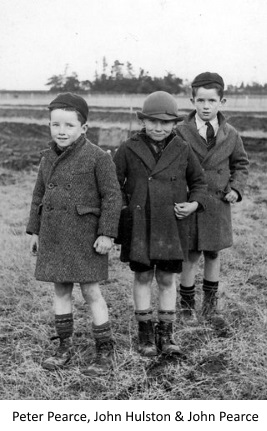 Water races had originally been hand cleaned with a fork. This was a hard job and some of the later caretakers were Reg Pascoe (who rode a bike along the roads following the races), Hec Meyer and Alan Harris (both with the aid of a pick-up truck.) The first mechanical cleaner was that used by Marshall Voice. An old Colonist wrote “Water has changed the whole face of nature in the district, and life that was hardly tolerable, is now worth living”. A monument was erected at Kirwee to acknowledge the efforts of Colonel De Renzie James Brett in initiating the proposition of a water supply for the Canterbury Plains.

A Red Cross Society was operating between 1943-48. The Presidents were Mrs A W Langdale and Mrs M Ashwell and Secretaries Miss R Langdale-Hunt and Mrs R J Northcott. Monthly meetings were held and parcels of food and clothing sent to soldiers overseas. Money was also sent to Red Cross Societies in countries devastated by War.

The Farmer’s Union was formed in 1924 and ran through to 1947. Chairmen were R S Roper, W H Overton, K H C Plimmer, S Pearce and A R Walker. Deputations were responsible for making electricity and telephone available to all households in the district.

The Women’s Division was formed to better the conditions of women and children in the country – aims included service to church, country, community, school and home. Presidents from 1937 for the next 25 years: Mrs R S Roper, Mrs Ashwell, Mrs J D Henderson and Mrs A W Langdale.

Mr and Mrs G W Jack were the publicans from 1950-64 and retired to a house they built on their land between the Hotel and the Domain. This land had originally been the Hotel’s horse grazing land. 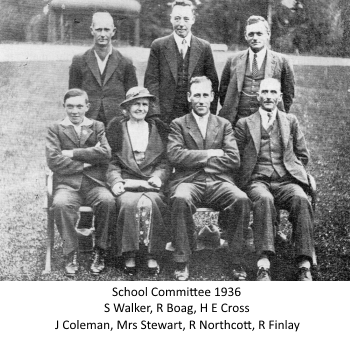 The West Melton Sub-branch of the Plunket Society was formed in 1950. Some of the first office holders were Mrs A Prouting, Mrs H C Wild, Mrs N K Calder, Mrs W Henderson, Mrs D Boon, Mrs L A Prouting and Mrs C E Read. The Plunket Nurse lived in Darfield and Clinics were held to help mothers and their young babies.

The Tennis Club was formed in 1900 and games were played on asphalt at the School for a number of years. Later in the 1930’s the Prouting, Donaldson and Summerfield families tried to form a club in the Domain but it wasn’t until 1958 that the present Club was formed. Two courts were laid in the N.E. corner of the Domain. Geoff Wright was President and Alan Adcock, Secretary.

During the 1950’s weekly movies were shown in the Hall. This was popular until homes had a TV. A Recreation Club was formed in 1951 and quoits, darts, indoor bowls and table tennis were played in the Hall. 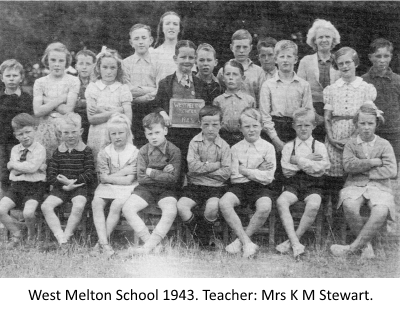 In 1927, the Education Board suggested that the small Schools of Halkett, West Melton and Rolleston should consolidate on to Weedons. The West Melton Committee agreed unanimously with the suggestion provided it was sited at West Melton. It obviously did not happen. The roll in the 1940’s got down to as low as 18, but look at what we have now – close on 400 students! Mrs K M Stewart was Head Teacher 1929-46 followed by Mrs E G Guilford 1947-51, Miss F M Morland 1952-54, W S Burnside 1955-57, F Warner 1958 and A V Loretto 1959-62. Miss Joan Slade started teaching Bible in Schools in 1949 in West Melton and four other local Schools. She was to continue this for over 40 years.